Day 64: Ladders on the Roof 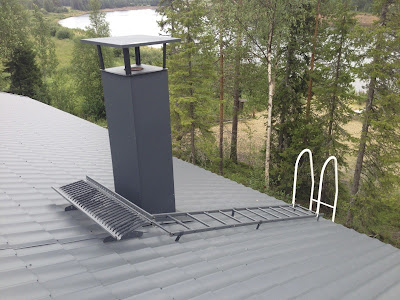 Not much has happened over the summer, and the few things that went on will be reported on in due time. When the previous blog post on Our House went out, we were already moving house, and subsequently it's been a very busy time catching up with all the things that had to stay behind due to the construction. The photo above shows the final stage of the work on the chimney. It is a legal requirement in Finland to have ladders going up to the chimney, which are easily accessible from the outside. These were installed on Day 64, i.e. on Monday, 22nd April 2013. Yes, it took me a while to put that on the blog, and the photo was taken in July, in case you are wondering where all the snow's gone. Stay tuned, there'll be more.