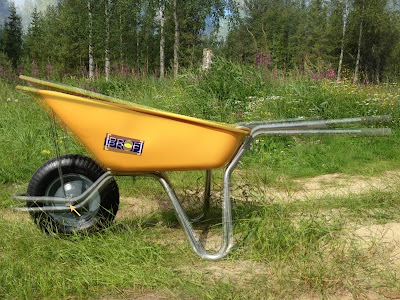 Besides having that red heavy-duty wheelbarrow, we decided it was time to buy a normal one for smaller jobs around Our House. Yeah, ok, it doesn't have a winch – but it's yellow! Anyway, the instructions clearly said to mount the axle (indicated by the yellow arrow, click to enlarge) on top of the frame. However, when lifting the wheel barrow on the handle bars, the arch in front of the wheel went so low, that it rammed into any minor obstacle and thereby made moving around on anything but a flat path impossible.

The problem reminded me of an improvement some off-road people do to their 4x4s, which is called "Spring Over Axle" conversion. The idea is that instead of hanging the leaf springs under the axle, they are mounted on top of it, thus giving a lot more ground clearance. Here a "Frame Over" conversion was called for.

The implementation of this on something as basic as a wheel barrow is shown in the photo montage above, which shows both before and after. The axle is at the same location in both photos (arrow), but it has been changed from mounted above to mounted below the frame, thereby lifting the front arch by some 7 cm or so, but at the same time lowering the handle bars and tilting the whole thing backwards. The result: it works! Much better than before!

Email ThisBlogThis!Share to TwitterShare to FacebookShare to Pinterest
Labels: How hard can it be?, spring over, tuning, wheelbarrow
Location: 99600 Sodankyla, Finland