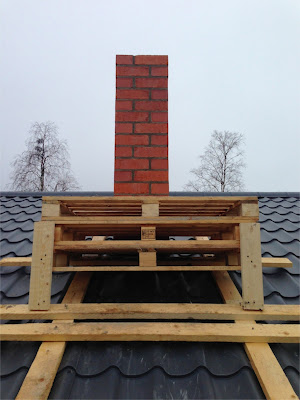 On 16th April (Day 60) in the early morning we began the work on the chimney. A hole was cut into the metal roof, and then the chimney was brought up to its final height. That meant carrying a lot of bricks and mortar up a ladder, but by midday it was done and it looked great. The picture above shows the makeshift scaffolding put into place as a work platform. The platform then grew with the chimney by adding more palettes. 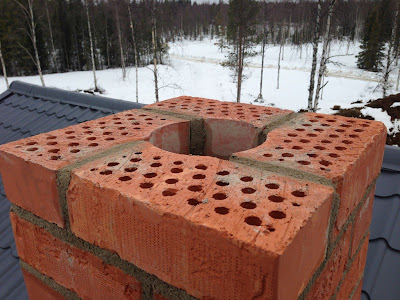 The second photo shows the chimney from above, looking towards the access road to our yard. Unfortunately the person supposed to make a metal cover for the chimney and thereby closing the roof again, didn't have time on the same day, so I had to wrap the hole with some tarp in order to make it survive the following night without water damage. It worked well, but that was due to the lucky fact that the night turned out to have remained dry.
Posted by Thomas Ulich at 17:30