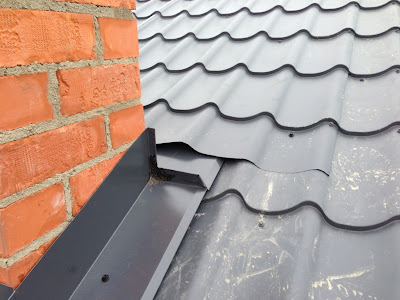 There's seemingly some magic to closing a hole in a roof. Once you cut a hole in the roof, the roof area above the hole acts as a collecting area for water, which then goes straight into – in this case – the gap between chimney and roof. How to close the gap reliably?

First a surround for the chimney base was installed (17th March, Day 62) in such a way, that its edge is under an additional sheet of roof cover. You can see the lower-right corner of the roofing in the photo above. 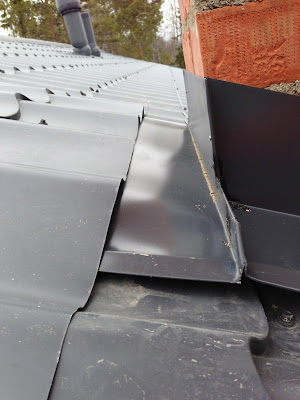 Thus the water coming from above, will flow onto the chimney surround.  The surround itself is shaped from a single sheet of metal such that there are no gaps and no seams, and the water is guided away from the chimney to flow down in adjacent channels. The photo shows the area just above the base of the chimney. 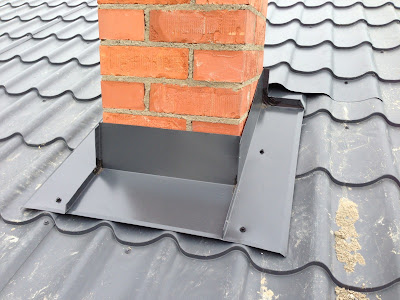 Here's a view of the entire chimney surround. All screws come with a rubber base, which locks them to the sheet metal in a water-tight fashion.

A small gap between chimney wall and the vertical bits of the surround remains. Thus water can still enter, but in far less quantities than before. This will be fixed another day, and for now the chimney had to be wrapped in some tarp again.