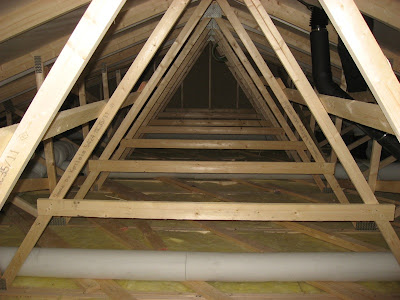 On 29th March, it was time again for us to make some improvements. The "floor" of the loft, as per standard delivery, is a mesh of planks and bars criss-crossing each other. Below these planks, and in between the bars, there's a 100 mm thick layer of mineral wool, under which there's a folio acting as vapour barrier. The folio also makes the house airtight, which aides insulation. Below the folio are the electrical cables and then the ceiling panelling. Thus it is fairly dangerous to step onto the yellow mineral wool, since one might just crash down into the house. The photo above shows the first planks crossing the loft, onto which longitudinal plants will be placed to create a walkway. 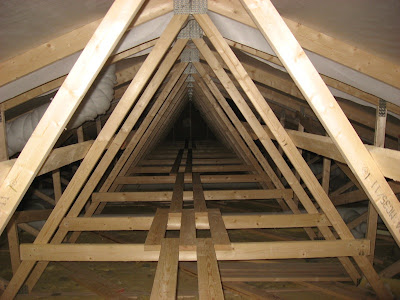 During the next phase, paper-based, insulating wool (Ecovilla) will be blown across the entire floor, which will have two side-effects: first, it will obscure the mesh of planks, making it a rather tricky guessing game as to where one can step safely. Secondly, the insulation effect is hinged on the fluffiness of the wool, and once it is compressed by stepping on, the effect is greatly compromised at that location. In order to provide access for jobs like cabling the TV aerial, we were advised to build a bridge about 65 cm high across the entire loft. Fortunately, there was enough left-over wood from the construction. The second photo shows the near-finished main walkway. Now one can move safely across the entire length of the house without stepping on insulation. 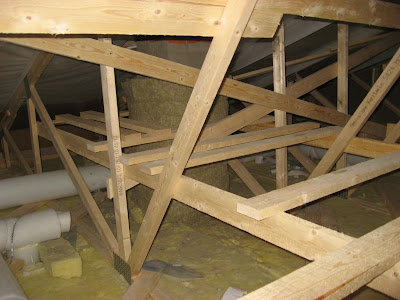 Finally, I extended the accessible area towards and around the chimney, just in case we need to get there when finishing it, and also to allow the chimney to be inspected anytime later on.
Posted by Thomas Ulich at 17:00