In late June, I went to Kilpisjärvi on a service mission to Finland's largest radio telescope, the Kilpisjärvi Atmospheric Imaging Receiver Array (KAIRA), which was built there by our institute, the Sodankylä Geophysical Observatory. The first thing I did upon arrival, was to place a GoPro time-lapse camera on an egg timer, in order to make a full 360° panoramic time-lapse film (YouTube). 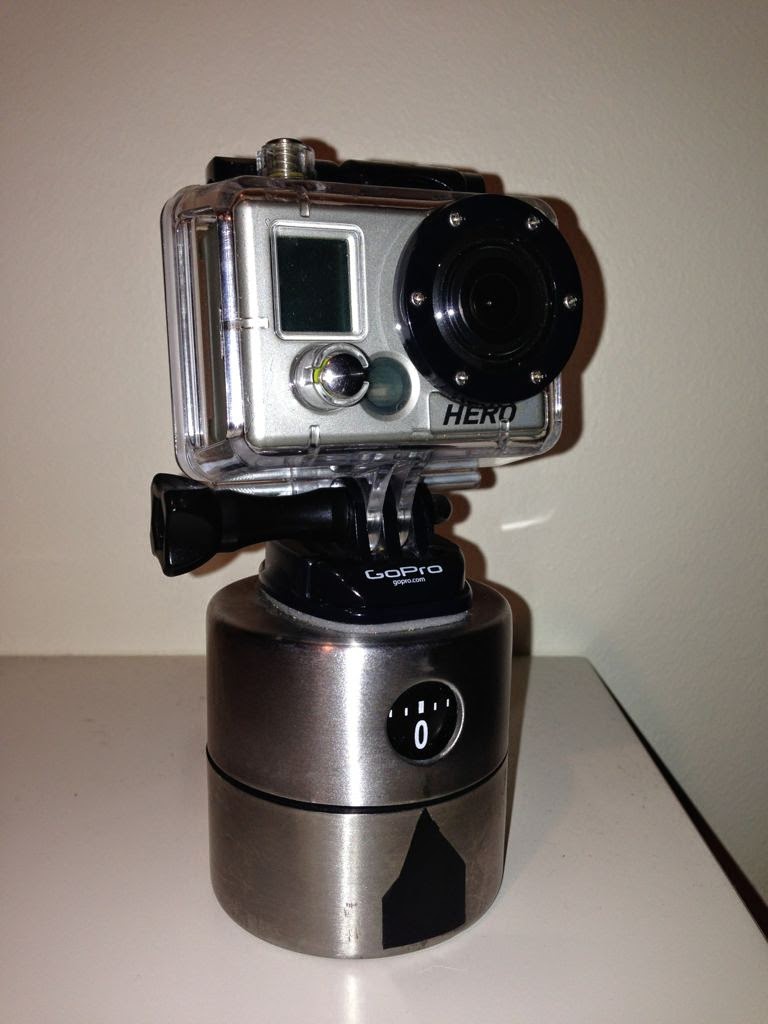 The GoPro cameras (Hero 2 above) have excellent optics for what they are, since they have a fixed focal length (no zoom) and also have fixed focus. Thus the extreme wide-angle lens needs to do only one thing and is optimised for that. Also, the GoPros have a built in time-lapse mode, i.e. they can take 11MP or 5MP images at a number of set intervals between half a second and one minute.

The cheapest way to make rotating time-lapse films is to mount the camera on a cheap (about 4€ or so) IKEA egg timer. The timers do a full 360° rotation in one hour, which is a good duration for a time-lapse. The only negative point is that they can only rotate in one direction (unless turned upside down).

For the film above, I programmed the camera to take a photo every 10 seconds, and set the timer to 60 minutes. Thus the camera was set to take one image per one degree of rotation. Rather arbitrarily, I decided then to use these images to stitch them together to 360° panoramas by using twelve 30° sections. These sections are indicated by the grey lines in the image at the top. Thus I needed to take every 30th image and see how much they overlap, and cut away the overlapping parts in order to have only the 30° centre sections. Then I stitched the 12 images together, 30 images apart, leading to a 360° view.

Now, since the camera took a photo for every degree of rotation, I made 360 different panoramas, each shifted by one degree with respected to the previous. These were then combined into a full panoramic time-lapse film, also called a pan-lapse film.

If you look carefully when watching the film (e.g. look at the clouds), you will see that the same bit of film repeats in every pane and migrates from left to right through all panes. In other words, every pane is a 30-image time-lapse film, repeated through all twelve panes, and thereby making up a film of 360 frames. The film looks really nice when put on loop, but this is unfortunately not possible on YouTube.

There are a few other games one can play with this set of images, so watch this space!

By the way, I got the idea of pan-lapse films from Ken Murphy of Murphlab, please visit his site for this and other exciting time-lapse projects.

Another blog post was published about this on the KAIRA blog today.