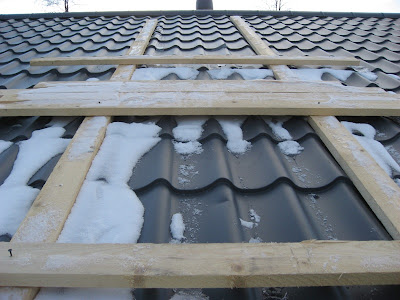 While on Tuesday, 26th March (Day 52), it was too cold to open the roof and bring the chimney up to its final height, we did some preparations. Planks were put on the roof to allow for safely climbing up and down. Later on a level palette will serve as a platform to put bricks and mortar on. Our plan to continue the next day failed, since it was snowing and looked all too grim to work on a roof, even though temperature-wise it would've been ok. In the end, Wednesday afternoon the weather was just brilliant. 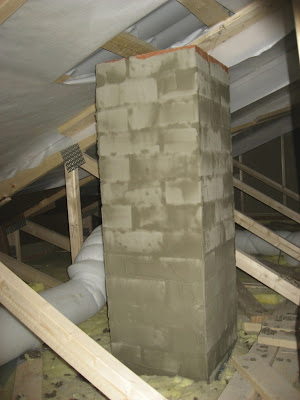 The decision was made to bring the chimney up to the maximum height possible inside the roof, without cutting the roof open, on Thursday, 28th March (Day 55). This can be done whatever the weather, and it is becoming increasingly urgent, because any day now the next team might arrive and blow a layer of Ekovilla (paper-based, insulating wool) into the loft. When this happens, the chimney must be as high as possible, so that it can be reached from the outside, since we will not be able to walk in the loft anymore. Once compressed by stepping on, the wool will become useless. 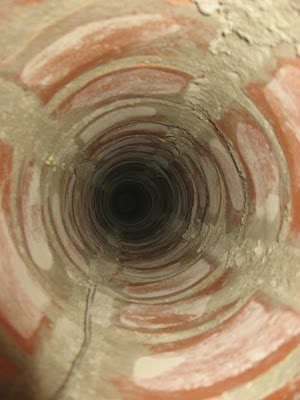 Santa-Vision: this is what Santa will see while descending down our chimney to deliver presents. I don't know how he squeezes himself through such tight places, but I know that we won't be getting any presents in the future with diameters larger than 180 mm!