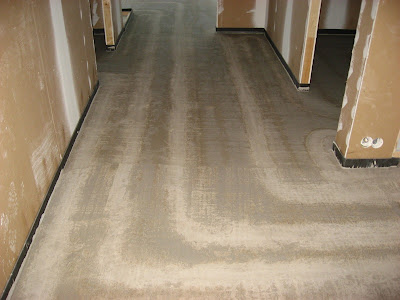 Not much has happened in the meantime, very little work has been done. Instead, the floor was left to dry after the concrete was poured in on Monday, 4th February. The photo shows the situation after four days (about 96 hours) of drying. The mists have gone, and so has the tropical climate in the house, which was prevalent on Tuesday and Wednesday. But the floor still shows wet patches, and the hoses of the floor heating show up as dry areas, since some lukewarm water is already circulating in most of them. 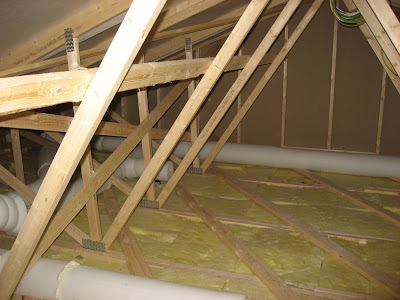 On the same day, 8th February, the building inspector of the local administration came to inspect the roof construction. We climbed through a tiny hatch into the space above the ceiling and encountered a maze of wooden beams holding the roof up. The roof is supposed to withstand a load of 300 kg of snow per square metre. Flat on the floor of this loft there are many diagonal planks, which will prevent shear. The white pipes are for the air ventilation system described earlier.