The work on the fireplace began on Thursday, 14th February. In the meantime, the floor was left to dry out more after pouring the concrete. It needed about a week to be strong enough to be loaded with about 4.5 tons of material for the fireplace. All week, I brought bricks, cement and other materials into the house. The photo above shows the first pile of bricks, about 750 kg for the firewall, which will be placed between the fireplace and the wall to our bedroom. The second load included some more specialised bricks, and 300 kg of cement. These loads proved that our old Land Cruiser pick-up is capable of smooth rides and comfortably soft suspension – if only preloaded by at least half a ton of bricks... 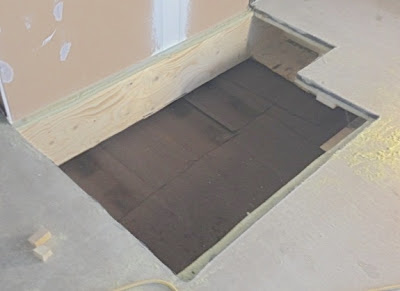 The first task was to cut the floor open, in order to reveal the special foundation of the fireplace, which was put in place with the rest of the foundations, and consist of a huge reinforced concrete block. As seen on the photo, some insulation is missing, and thus the structure of the house floor is revealed. It is interesting to see that the concrete layer on the floor is really only just thick enough to cover the hoses for the floor heating, a couple of centimetre. 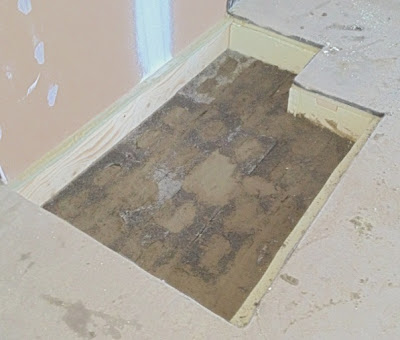 First, polyurethane foam was used to seal the house against the concrete foundation, then the empty spaces were stuffed with FinnFoam (yep, that one again), and then a first layer of large, light-weight bricks was put down. Another layer will follow later in order to bring the foundation up to the level of the floor in the house. This will be done later, in order to allow the first layer to dry out properly. In the meantime, there are a lot more bricks to be brought into Our House to warm up and dry out.