Day 29b: Frame of Fireplace 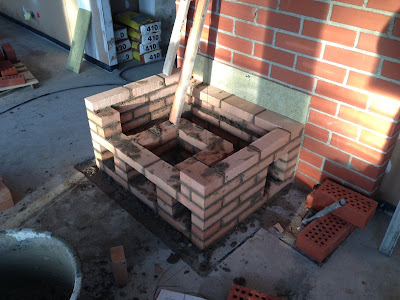 While the drilling was going on outside, we were busy in the house continuing the work on the fireplace. Now it was time to start work on the frame, which is basically a few layers of bricks as foundation with integrated channels for the smoke and ash cleaning, and then outside and rear walls. This frame will later be filled with the heart of the fireplace, i.e. the structure of the cavities for the fire.

The photo above shows the situation at lunch break (layers 1-6 complete). In the front there will be three hatches for cleaning, and the opening on the side is where the chimney will be connected. It seems wrong to connect the chimney at the bottom, but the idea is that it will create a draft, which sucks the exhaust from the fires first up, then down in the fireplace, and then out of the house. This ensures that the entire mass of the fireplace (well over 3 tons) will heat up and radiate for a long time after heating. Also the chimney is designed such that it will heat up and slowly release heat into the surroundings. 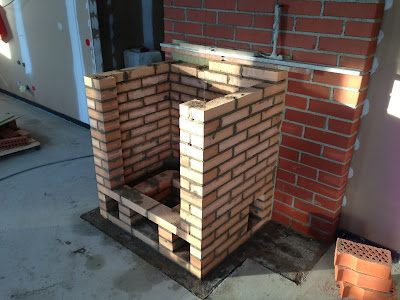 The next photo shows the frame at the end of the day (layers 1-15 complete). The inside remains empty for now, it will be filled later during the week. By the way, at least three types of bricks are used here. The frame is made of solid bricks, which simply increase mass and thereby heat capacity. The heart will be made of fireproof bricks. Finally, the outside shell will be made of normal bricks. 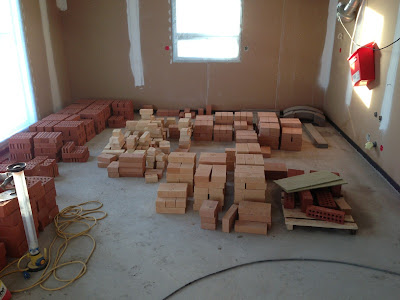 Looking at our future kitchen, it seems that the brick density is beginning to decrease: some piles are already gone. But it is still hard to imagine that all these bricks fit into that little space, which will be our fireplace. 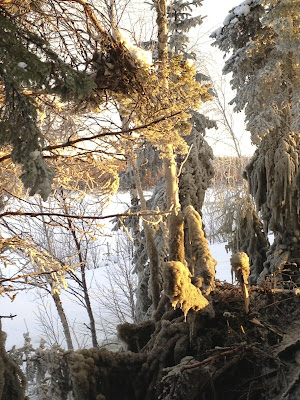 For the fun of it, here's another view of the frozen trees, which have been sprayed with water and fine dust from the drilling of the geothermal well.