Day 29a: We Are Going Geothermal! 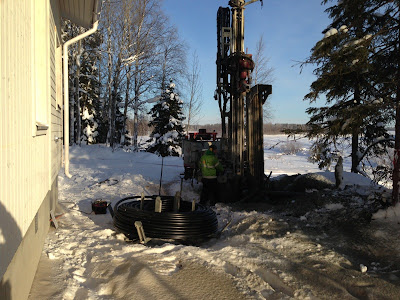 The drilling work of the geothermal was completed on Day 29 (19th February). The team found bedrock at a depth of 18 metres, and then drilled a well of 125 metres into the bedrock, i.e. a total depth of 143 metres. Temperatures were down to –22°C last night, followed by a bright a sunny day. This meant that all the water, which came out of the well, had created solidly frozen dusty ice around the bore hole. In the foreground, 150 metres of hose wait to be lowered into the well. 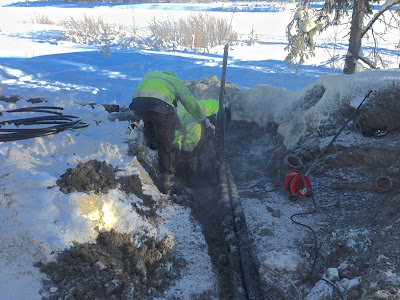 At about midday, the drilling was completed, and the hose was installed. It was then connected to the pipes coming from the heat pump in the house. The hose forms a loop, meaning it goes 143 m into the well, turns around, and comes back up. A special liquid containing water and 28% ethanol (denatured, so no use to steal the stuff!) will be pumped through the well, which will pick up heat from the ground and deliver it to the heat pump in the house, which, in turn, will do some magic to heat our water. More on that later. 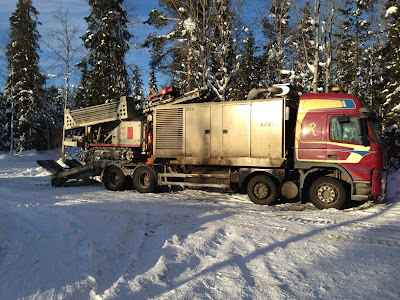 The tracked drill was then loaded back onto its lorry in order to be transported to another house in Sodankylä by the same manufacturer for drilling the next well. 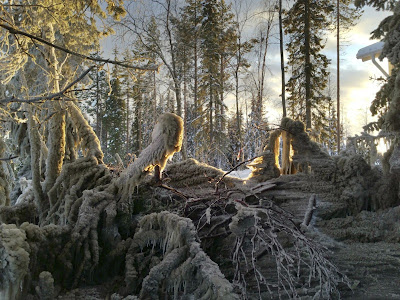 The material extracted from the bore hole is a mix of very fine dust and water. This is simply ejected into the surroundings. At temperatures around –20°C this mixture freezes rapidly onto any kind of structures, and thus a few trees nearby were converted into bizarre looking ice sculptures or some form of Tolkienesque forest. 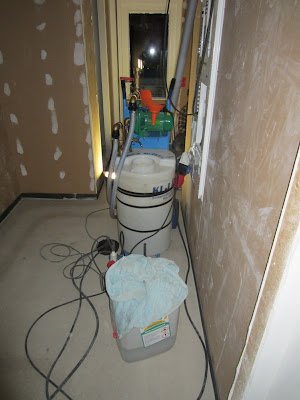 In the evening, the geothermal heat pump was started up, but at this stage a pump with a barrel of fluid was attached to it. This will run for a few hours to make sure there are no air bubbles in the system. 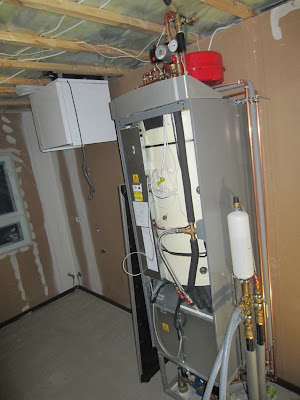 Here's a view of the geothermal heat pump, with the front panel removed. The two thick hoses (light-grey, perpendicular to the vertical brass pipes in the lower right) are connected to the temporary pump. The two insulated black hoses coming out of the floor are connected to the well. The white plastic tank on top of the brass pipes is the overflow reservoir, and it serves as a place to check if there's enough liquid in the system. The rest of the machine provides warm water for the floor heating as well as for the taps and shower. The beige, large body in the top two-thirds of the device are in fact the water tanks for the hot water supply.

All of this was connected right away, which means that since this day, Our House is powered by geothermal energy. Yay!
Posted by Thomas Ulich at 15:00