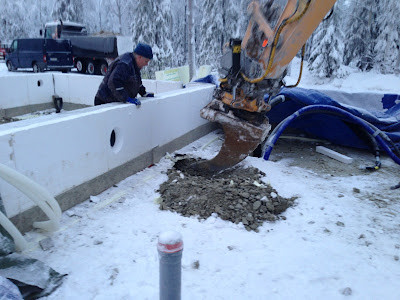 Today, work resumed on the site. In the morning, the digger arrived again, and brought an interesting and very handy tool: a gigantic claw, which can be used to break frozen ground. The claw can be rotated at the end of the arm, i.e. it can poke forward, or claw backward. Here it was used to break through compacted gravel and poke a hole under the foundations for additional electrical cables to be passed through. This was an omission in the original build, and now this problem is fixed and we can have electricity where we need it. 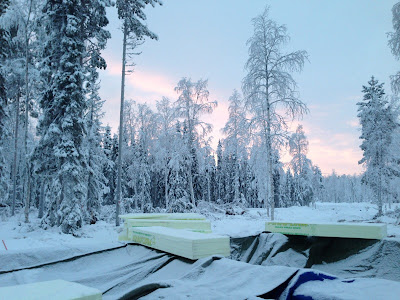 In the afternoon, we were treated to a stunning sky again at sunset. Lapland in winter is really beautiful, and we are extremely lucky that we have clear skies, but only some –10°C frost. At this time of the year, it is not uncommon to have –20°C and even down to –40°C. Double lucky, because at lower temperature the construction would have not been possible, thereby delaying the entire process, and also because it's much more enjoyable when not freezing one's toes off. 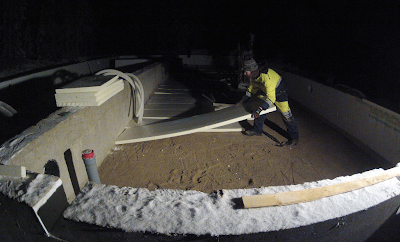 After the cable conduits were dug under the foundations, the area between the walls was filled with fine sand to make it smooth. An improvised piece of plank served as a rake to make the sand nice and even. On top of the sand, finally the FinnFoam was installed, a job that went well into the night. Fortunately my colleague Juha dropped by to give a hand with moving some heavy stuff around. Tomorrow we'll do the other half of the foundations, and then we are ready to received Our House.

Watch a time-lapse movie of this first part of FinnFoaming.
Posted by Thomas Ulich at 21:56