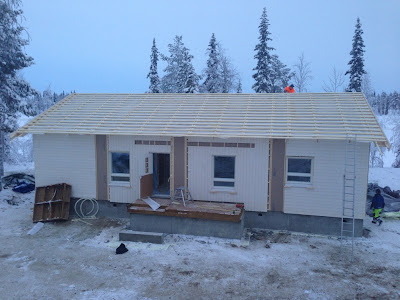 Now the further development of Our House project is in the hands of Muurametalot, the company we bought it from – with the sole exception of the fire place, which will be built in weeks 5 and 6. We can mostly relax and wait until they give us the keys. This important event is going to happen on 11th April apparently, so we anticipate to move after that. In the meantime we will of course check on the progress, it's just so exciting to see the progress.

Last night and this morning, the roof was made weather proof, and also the gaps between the four modules are closed now. Also, in the morning the team from Rovakaira arrived one more time in order to connect the main fuse box to the electrical grid and of course install an electricity meter. We didn't tell them yet that we are planning to make as little use of it as possible: heating the house with geothermal energy and using modern energy-saving LED lighting wherever possible.

The photo above was taken today in the early afternoon. It looks ever more house-ish. We have been told that the outer layer roof material will be delivered on Tuesday, and if possible we will try to film the installation of that, at least on the western side of the roof visible in the photo above.