Today not much happened at the site. In the morning, the moulds were removed, and the walls were covered by large tarps. Also the heating system for the concrete was removed. In the early afternoon, I met the site supervisor at Our House, and we discussed the work so far. First, however, we used a very fancy thermometer to measure the surface temperature of the concrete foundations. It turned out that they were frozen in some places (which is bad), and clearly above freezing in other places (which is good). Later in the evening I returned and with the help of my colleague Juha, we covered all the remaining walls. Now the chemical reaction in the concrete is the only source of heat. Let's hope that is enough. The countdown is definitely running: the house will come in a week's time! 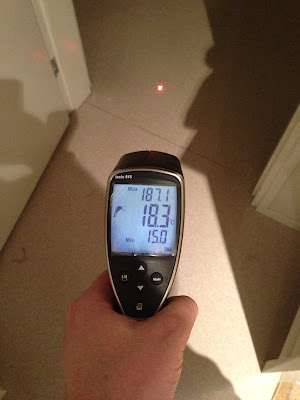 The instrument, when pushing a button, projects a crosshair with a laser onto the surface to be measured, and then it does the measurement instantly using the infrared radiation from that surface. In the photo above I am checking out constantly cold floors in our current flat with the instrument. The minimum and maximum temperatures are the ones observed during the same session, and in this case I had pointed at the cold window, and at a halogen spot light. The device is rated to measure temperatures between –35°C and +950°C with an error of less than a degree. This comes at a price, the IR thermometer costs roughly a thousand euros, but fortunately we were able to borrow this one for free. 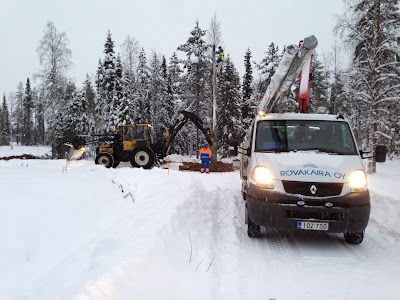 Since no new photos were taken today, here's an old one from 18th December, when the company, which owns the local electrical grid, brought the cable to our plot. Since we will be slightly off the main road, Rovakaira needed to place three poles to suspend the cables from, and then continue underground to our plot. From there, we had to bring the cables to the house, which happened on Day 5.