Day 6: Concrete for the Foundations 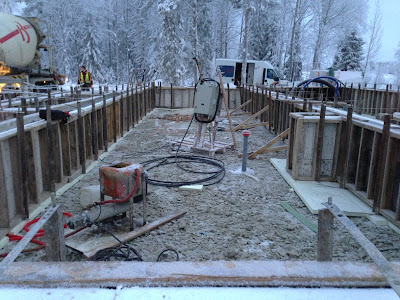 Today was another race against the clock. The concrete mixers were scheduled to arrive at 10 a.m., but the electrical cable, which was put down yesterday, needed still to be connected to a temporary fuse box. This process was going on when the first concrete mixer/concrete pump lorry arrived. The photo above shows the readily connected fusebox (grey, in background), as well as the heater/pump system to heat the concrete in order to harden properly despite the frost (grey and red, foreground; the red hose runs through all walls). 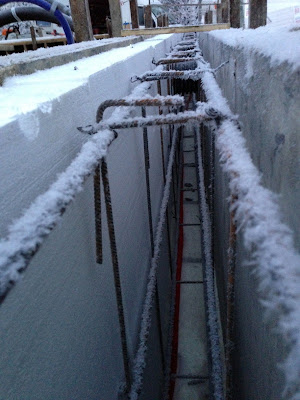 The team had done a fantastic job until late last night, and certainly again early today, in order to prepare everything ready for the concrete. The photo above shows the space to be filled, including the steel reinforcements and the red heating hose on the bottom. It seems Our House has central heating already! 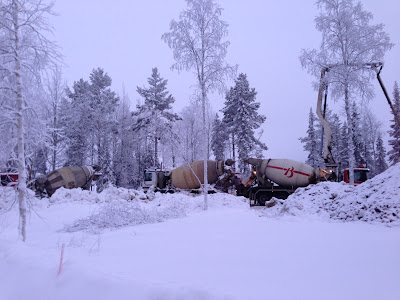 At some point we had three concrete lorries on the yard. The one on the right stayed all the time, since it was a combination of mixer and concrete pump. The other lorries came and went, and poured their concrete into the first lorry. 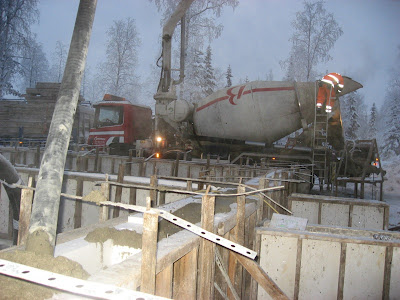 Via the hose at the end of the long arm of the pump, the concrete flowed into the moulds rapidly – and problems appeared. It turned out that our contractors didn't do their job properly and flatten the ground enough. This resulted in large gaps under the moulds. While unfortunate in itself, it was then aggravated by the consistency of the concrete, which was delivered with too high water content. This meant that it was very liquid and flowed straight out of the bottom of the moulds in many places. We ended up needing a couple of extra cubic metres of concrete, another delivery, and lost time. We'll have to see what to do about that in the end. The rather atmospheric shot above shows the end of the hose delivering the concrete, and the flash highlights nicely all the steam in the air: the concrete was delivered hot in order to prevent freezing. 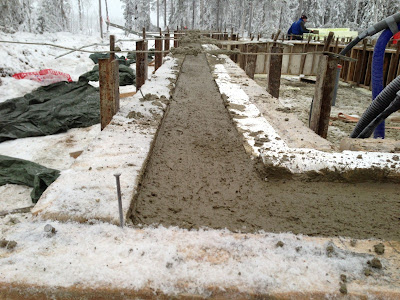 The result looks great though, and owes a lot to the highly competent team from Pohjois-Suomen Perustuspalvelu Oy, who prepared and executed the foundation work – they worked very hard indeed and did a fantastic job. The photo above shows the ready product (well, a corner thereof) after the top had been levelled to the exact building height with the help of a laser level as a reference. The laser is just visible in the distance as a red spot.

PS: Click on the photos for enlarged versions.
Posted by Thomas Ulich at 21:28