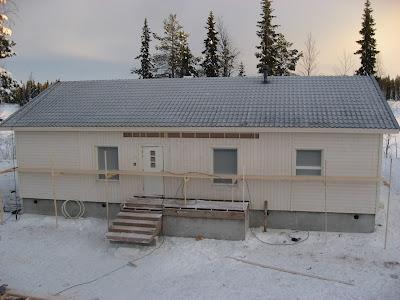 When visiting Our House today, the first thing that was obvious was the progress on the roof. As seen above, the roof is complete now. All metal sheets have been installed, and so have the bridging bits at both ends of the roof, and two air vents (little chimneys). These air vents are for the extractor fan in the kitchen (closer by) and for the air exchange system of the whole house (further away, hard to see with a tree in the background). 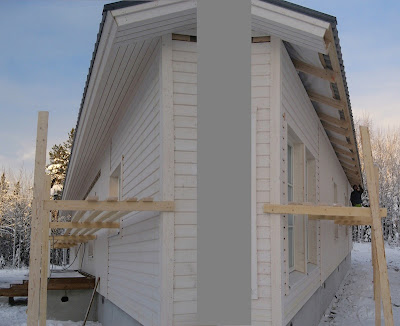 Also the under side of the roof overhanging the walls had been covered on the western side with the help of some makeshift scaffolding. The eastern side was just waiting to be tackled next. The image above shows the two sides in comparison in a before-after fashion. 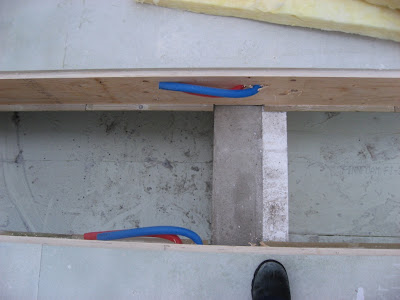 Also the floors and walls are being worked on. Our House was delivered in four large modules, and these were placed onto the foundations with a gap of about half a metre in between them. The photo above shows the gap, seen from inside the house, above the centre wall of the foundations. The red and blue hoses are for the water supply from the boiler to the kitchen. 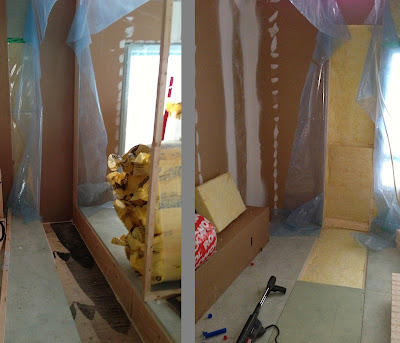 The next image shows the gaps in the floors being closed. First a wooden panel closes the bottom, then rock wool is filled in the gap, and finally another wooden panel is placed on top. The gap in the walls is closed in a similar fashion. The transparent blue sheets of plastic will be closed across the gap. They will help to make the house air-tight, which is a requirement for highly effective insulation. The air exchange system mentioned above will be the main way to ventilate the house. The system employs a heat exchanger in winter in order to pre-warm fresh air using the heat contained in the outflowing air.